Larsson is our first Bolognese, born 2008-08-28. He is shown both in Sweden and abroad. Except his champion titles in Sweden, Denmak, Norway as well as C.I.B he has also won CAC in Germany, the Netherlands, Austria and Italy.

When Larsson moved to us we had thought that he should be a mascot to our Lagottos. It was Larsson that opened up our eyes for the bolognese and he is the reason that we both have them al today as well as breed them. 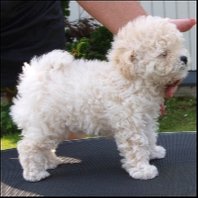