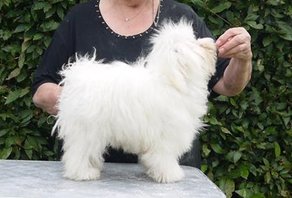 Ada is bred by Carla Perondi, kennel Chiesanova, in Italien. She is born 2013-01-02 and she is after our Tore. We have big hopes for her and finds it very nice to see how similar she is to both Tore and also her half-sister Agata.

Ada won her last CAC for her swedish and norwegian champion title the day after she turned two years old, wich is the first day that is possible in these countries, a month later she became best female with CAC and CACIB in Italy.

In 2015 and 2016 she collected lots of CAC in Italy and completed her italian champion title by winning the club show in Pisa in June 2016.