The ultrasonography confirmed that Adrianna is pregnant and we are now preparing for the upcoming litter.

Alcapone has been with us since the World Dog Show in Italy and have now won CAC in Sweden, Denmark and Norway and has with that become Swedish, Danish, Norwegian and Nordic champion. With cacib from Denmark and Sweden he is also qualified for the international champion title, C.I.B.

Tore went to the European Winnershow in Lilleström, Norway together with his breeder Carina. For the third time in a row he got the title and also became best of breed.

The litter out of Agata was born on July 11th. Unfortunatley the litter consisted of just one puppy and we have choosen to keep Dagny at our kennel to see how she developes.

We are expecting a bolognese litter. For more information se under the page puppies.

With us back from Italy we got Alcapone Di Chiesanova, from the same litter as our Ada, and he will spend some time with us in Scandinavia. We haven't even had him for a wee, most of the time we have spent in the motorhome, and he already has a new champion title.

Also at this WDS and radon in Italy we have had great results! It's almost unreal! Tore is World Winner for the 4th time!

Tore and Agata has been to the international show in Klagenfurt, Austria. Both of them got CAC, Cacib and finally Tore got BOB and Agata BOS. They are both also qualified for Crufts 2016!

Our first Lagotto litter is born! On April 5th one male and two femles was born. We are looking forward to follow the litter. For more information se under Puppies/Current litter.

Ada has been in Italy for about two months now and has participated in several dog shows. This weekend she got her 6th CAC and 4th BOB. She has also been placed as BIS-3 Razze Italiane.

We got fantastic results at the swedish winnershow! Except best of breed and the title Swedish Winner-15 Tore also got a 2nd place in the group among very goodlooking dogs. This time he was showed by his breeder Carina Johansson. .

In conjunction with the international show in Malmö the annual meeting at BBHC was held. Johanna remains at the board and Pia at the nomination committee.

Issa is mated and we have seen that she is pregnant. We are waiting lagoon puppies in week 15. For more information see under the page puppies.

In conjunction with the international show in Modena , wich swell was a moisture special for bolognese, the annual meeting of CBM was held on the friday and a handling- and grooming stag arranged by the CBM.

The eye exam didn't showed any hereditary diseases and the result was clear.

We had fantastic results both days at MyDOG this weekend. Both Ada and Adrianna got their last CAC and now got the titles Swedish Champions. 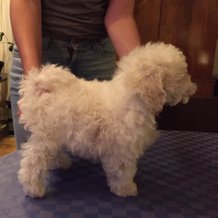 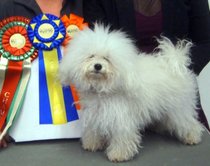 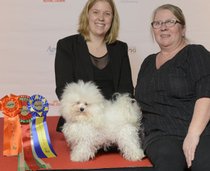 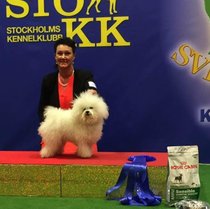 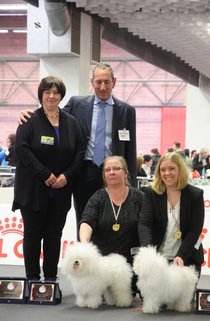